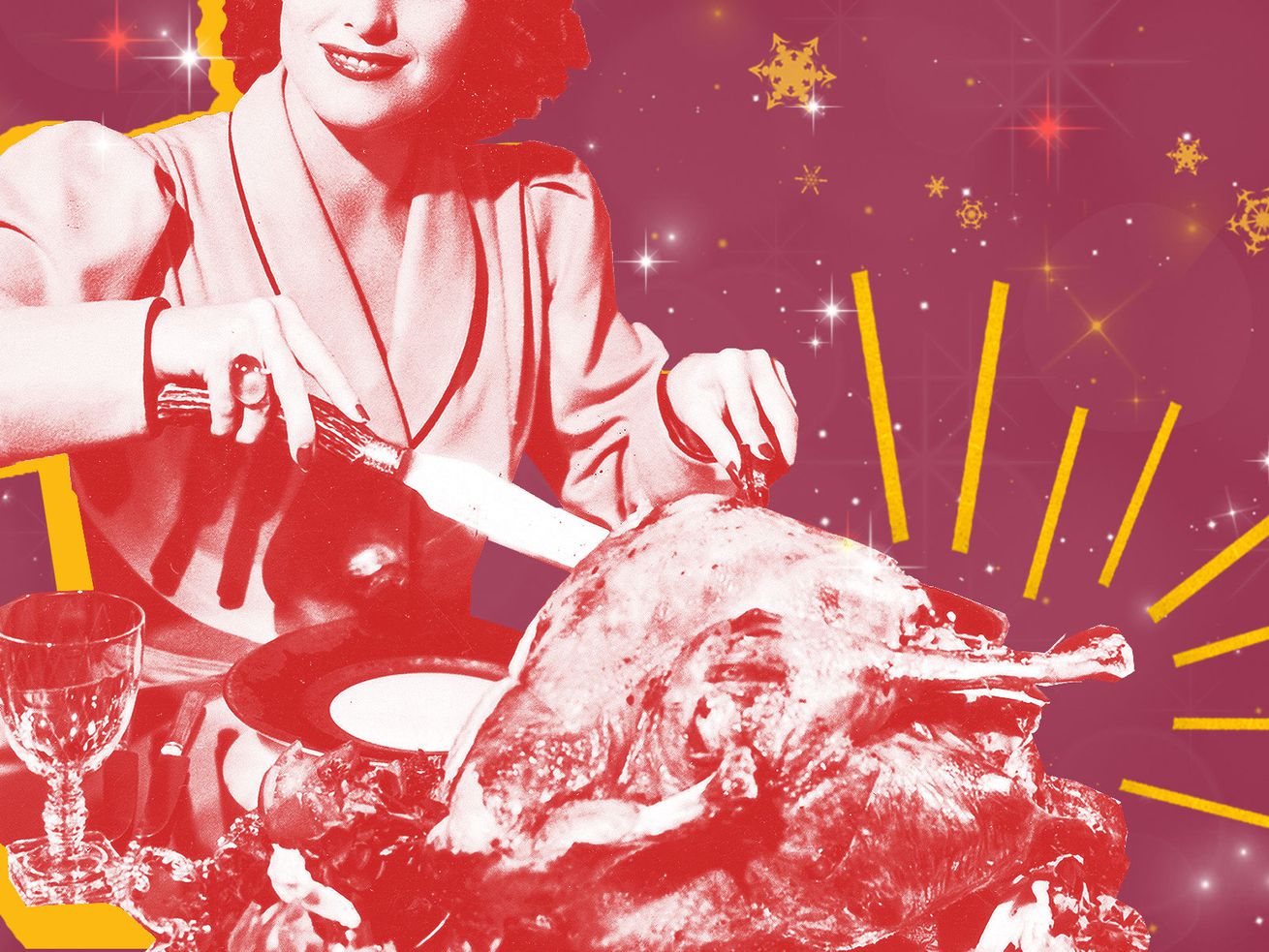 Above the sticky wedges of pecan pie, the slabs of turkey breast, the boatloads of gravy and the candied yams, it’s familiarity that I look forward to during the holidays. The same aunts and uncles show up year after year — some reliably late, others inconveniently early. The green bean casserole arrives with my mother’s friends, the couple whose names I still can’t remember after 20-plus years celebrating the holiday with them. Our rabbi brings a bottle of his homemade limoncello, my grandmother makes a just-barely-edible pot of gravy, and around 4 p.m. I begin to carve two enormous turkeys, one lightly browned in the oven, the other a hair too dark from the heat of the grill.

Things are very different this year, but I refuse to call off the holidays entirely. There will be no forgotten salads, no precariously balanced pie, and no need for two roast turkeys — I know. Instead, I’ll be slicing and dicing and cutting up recipes to feed just three or four instead of a party of 50. Some recipes lend themselves to scaling. Cutting down on candied yams, for instance, is just a matter of buying fewer sweet potatoes and using a smaller pot, less sugar, fewer sticks of butter. But sometimes, changing the yield of a recipe can be deceptively complicated; it’s actually a somewhat challenging (but not impossible!) exercise in kitchen intuition, proper research, and keeping your eye out for red flags.

I don’t think my fragile psyche can handle the disappointment of a tough-as-hell pan of cornbread for one, so I called up a few friends who are in the business of making recipes work.

Before you start hacking up measurements by twos or fours, you should really give your favorite recipes a good read. Sasha Marx, senior culinary editor at Serious Eats, recommends you begin by taking a look at the listed measurements.

“The first thing I like to do is look at the ingredient list,” he says. “You often come across sticking points, like if the recipe calls for three eggs and you want to halve the recipe. Getting one and a half eggs can be a little tricky.” The same goes for ingredients you’re unlikely to use up later. Often, recipe developers will design their dishes to use the common store-bought amount of an ingredient, like one can of pumpkin puree, or a full bag of frozen cranberries. Halving a can of this or a bag of that is certainly easier than dividing an egg in half, but you’ll be stuck with half a bag of frozen cranberries until next year. Sometimes it’s easier to just cook a full recipe and freeze the leftovers for easy use later. Let’s be honest: You are never, ever going to use that quarter can of condensed milk.

Once you’ve confirmed the ingredient list can be easily modified, take a few minutes to read through the instructions and take note of the equipment that’s called for. Ben Mims, a cooking columnist at the Los Angeles Times, says that even with a neatly halved recipe, cooks should pay attention to the size of their pans, pots, and baking dishes.

“As you reduce the quantity of ingredients that you’re cooking, you will need to factor in and reduce the size of the cooking vessel, and you may need to reduce cooking time,” Mims says. “To me, it’s always a matter of making sure the proportions stay in check. And a lot of recipes are developed specifically to work as-is.” Mims points out that if you make half the amount of cranberry sauce in the medium or large pot a recipe might call for, it’s likely the liquid that’s supposed to cover and cook the cranberries won’t submerge the fruit. The solution? Eyeball and change the size of the cooking vessel accordingly. These small adjustments can have a major effect on the outcome of a dish.

When it comes to baked dishes whose ingredients can easily be adjusted, Mims sees no problem with scaling down. “Most of those side dishes are going to be made in 9-by-13-inch baking dishes. So just cut the recipe in half and make it in an 8-inch pan, which literally everybody has.”

Cooking times may start to change when you adjust volume. There’s no perfect formula to follow, so to feel more confident as you make these changes, seek out recipes that include good sensory cues. “Look for ones that have well-stated visual cues rather than just timing cues,” Marx says. If a recipe says to cook squash until it’s golden brown and begins to smell sweet, you can trust your nose and eyes no matter how much squash you’re cooking.

“It’s always a matter of making sure the proportions stay in check. A lot of recipes are developed specifically to work as-is.”

Maybe scaling down a recipe seems like more trouble than it’s worth, and you prefer to follow recipes precisely as they’re written. In that case, the internet is your best friend: You can find all sorts of recipe roundups, menus, and suggestions for intimate gatherings to feed fewer people.

But even if you still want to make Nana’s stuffing, the one that serves 15, small-yield recipes can act as a guide. “If you don’t feel comfortable cutting down your favorite recipes, find other resources that’ve done this work already,” Mims suggests. “See how they treat a green bean casserole, see how they treat yeast rolls. Look at the proportions of your favorite family recipe in comparison to those, and then see if it makes sense to modify your recipe. If you can make similar changes, go for it, and if not, just make the one that you found online.” This kind of adaptation requires a fair deal of confidence in the kitchen, and probably isn’t as simple as scaling all the ingredients down. But if you’re committed to a recipe and unsure of how to scale down, it can be helpful to compare it to others on the internet to get a sense for the proper cooking time, baking vessel, and signs of doneness.

Plan for (and embrace) leftovers

Scaling downs recipes shouldn’t mean eliminating leftovers altogether. I could eat leftovers forever, so instead of quartering recipes, I’ll be halving some, and leaving others exactly as they are. “Really think about the week after the big meal, as far as leftovers go,” says Marx. “Plan out what you like to eat. Get creative with cross-utilization.” If you live for turkey-and-cranberry-sauce sandwiches, plan to enjoy the fruits of your labor for a few extra meals. In this year of endless cooking and total exhaustion, you might even want to consider freezing some holiday classics so you can thaw your festive spirit in a few months.

But be realistic with yourself, and if you’re just not a leftovers lover, take that into account as you plan your menu and the quantities of each dish.

Finally, a note about baking

There are a lot of factors that determine how well a recipe will reduce. As a rule of thumb, it’s best to avoid messing with most baking recipes, unless you’re a pro. You’ve probably heard the somewhat tired (and very annoying to most professional bakers) saying that “cooking is an art, baking is a science.” It’s an oversimplification, but the refrain contains a bit of truth. Baking does demand you pay attention to oven temperature, the volume of a baking dish, and the amount of time something will take to bake. As soon as you change any of these variables, your recipe might start to get a little wonky. This will make reducing, say, a pumpkin pie recipe more trouble than it’s probably worth. You’d have to make half the crust, decide on a smaller baking dish, adjust the amount of filling, and then take a guess at how long it will take for the pie to bake, and for the filling to set.

Some sweets, like a crumble or a cobbler, are more forgiving than pie or cake, and can be easily reduced by scaling ingredients and choosing a smaller baking dish. Other desserts, baked in ramekins and other small dishes, are also a great choice. “A crumble or cobbler has a pretty steadfast fruit-to-sugar ratio,” says Marx. “And if you are concerned with making individual desserts, then look at ones that are already served individually: Custards like panna cotta, creme brulee, that family of desserts that are already served in individual ramekins — those can easily be scaled.”

If you’ve gotten to this point and are still, for some mysterious reason, trying to find a way to make less pie, the internet is home to plenty of recipes for tartlets and hand pies.

That said, I’ve never met someone who’s devastated to have leftover pie and cookies. Really, these are some of the best leftovers to have, and they’ll be devoured many days before they would’ve gone bad. With this in mind, I recommend just… baking and eating the whole damn pie. You might have to settle on just one pie, instead of an entire spread, but there’s no good reason to spend an evening trying to cut a pecan pie recipe in half. Now that your whole, beautiful pie is in the oven, it’s time to plan the rest of the (tiny) feast.

And if you hate how this sounds, just cook the full meal

If the thought of turning your ordinarily enormous holiday feast into a set of dishes that fit on a coffee table makes you miserable, you could scrap the idea of scaling down and spend the days leading up to the holidays making a seriously enormous meal. That’s what Mims plans to do. “If you are feeding half the people you normally feed, take that other half of the food, package it up, and give it to your neighbor or your friend,” he says. “Especially if you’re someone who has the means to afford and pay for all the food, you can gift it.” If splurging on a big feast this year isn’t an option, Mims suggests pooling resources with a couple friends. “You all buy the groceries, maybe one person cooks, and then you split it up with everybody.”

He’ll be cooking some of his greatest hits in aluminum baking dishes this year, so that once they’re done, he can hop in the car and drive the food to friends’ houses. “Scaling recipes, which some people might be great at, is just not for me,” he says. “This year, I’m approaching the holidays with the idea to feed my community, feed family and friends, the people who can’t or don’t want to spend a lot of time cooking. And then you have this feeling of sharing, of spreading the wealth a little bit.”